During the Paul Brand "12 Songs" album promotion
the album received support from radio shows around the UK.
BBC Radio Scotland’s Iain Anderson show featured two tracks
"WALKING UP THE ROYAL MILE" and "MORNING RAIN"
and BBC nan Gaidheal also played "LIFE AFTER LOVE".
The Paul Brand "12 Songs" album was named album of the week
with Stevie Connor on Blues and Roots Radio based in Toronto Canada.
In addition the album has received extensive community radio airplay.

This community airplay included a three hour
special interview with Elaine Lamb on Heat FM New York and
Sparkle FM, along with a Paul Hazelle one hour special interview on Mearns FM.
Ralph MacGillivray at Crystal FM also featured Paul Brand music on his show
for a total of nine consecutive weeks including a live performance session.

You can listen to Elaine's HEAT FM New York interview below:

Paul independently released three singles from the "12 Songs" album:
"STANDING OVER ELVIS", "WALKING UP THE ROYAL MILE"
and "NOTHING IN THE WORLD". Four promotional videos
were produced by Edinburgh songwriter
Bob Heatlie and former Queen bass player Douglas Bogie Grey.
These videos have recieved and are continuing to recieve great feedback worldwide.

THE SUNDOGS - A BLAST FROM THE PAST

Paul recently finished writing songs for his next album
and is looking to start rehearsing and gigging with a band,
in preparation for recording the new material in the coming months.


PAUL BRAND
"WALKING UP THE ROYAL MILE"
THE SINGLE - OUT NOW! 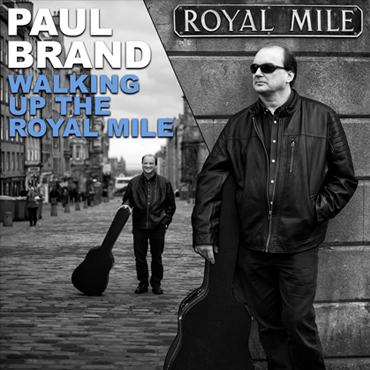 "Walking Up The Royal Mile" is the latest single
from Paul Brand's current album "12 SONGS".

"Walking Up The Royal Mile" has a Country feel to it
and visits many parts of Paul Brand’s home city, Edinburgh.
I found it pleasurable to mentally visit those places again
and If you have never been there, all the names are familiar.
It follows a rambler back in town whose friends have all got homes and are settled.
He should be moving on yet he doesn't know why,
maybe it's the thought of loving someone.
He remembers his dreams but he sees HER in all of them.
He recollects the attractiveness of cities around the world,
but he still ends up walking up the Royal Mile.
This attractive song has all the attributes of a modern country song
and is performed well. It is a song that grows on you the more you listen to it.
The song is a good advertisement for the album
which based on this, should be a good buy."

CLICK HERE to buy the "12 SONGS" album on CD

The "12 SONGS" album is also available for digital download.
To download it all or just the "Walking Up The Royal Mile" single track on ITUNES
CLICK HERE 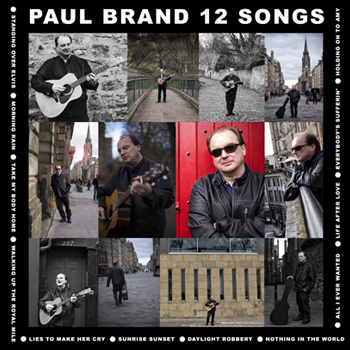 All 12 songs on the "12 SONGS" album
were written between 1992 and 2012 by PAUL BRAND.
"12 SONGS" was produced by Paul Brand and Allan Knox
with additional production by Garry Boyle.

THE ROCKER REVIEW by stuartahamilton

Paul Brand 12 Songs is a solo record which is rooted in
singer/songwriter meets country, meets folk, and very enjoyable it is too.
The songs are very strong and it must be bad luck that stopped him
making more of a name for himself over the years.
His voice has a lived in quality that suits his music.
The likes of ‘Walking Up The Royal Mile’, ‘All I Ever Wanted’ and ‘Take My Body Home’
have tales to tell and they’re tales well worth hearing. A delightful surprise.